At some point in your career, you may face the daunting prospect of naming a company or product. The path to a trademarkable brand name is steep and treacherous. Curvy, too. Fortunately, help is here. The six tips below offer suggestions for what you shouldn’t—and most importantly—what you should do to get on the most direct path to a winning name.

1. Wait until the very last minute

Naming is easy and takes almost no time at all. There’s no need for any up-front thinking about strategy, vision, positioning, or any of that nonsense. Companies that spend weeks and weeks screening trademarks waste their time and money, hapless victims of paranoia. And CEOs are far too busy to be bothered with the superficial exercise of selecting a name; best not to involve them at all. But if absolutely necessary, wait until the evening before launch and email the new name to the CEO for maximum impact.

The truth is, naming a company or product takes time, and omitting steps actually adds to the duration of a naming program. Establishing a strategy and naming objectives before name development will accelerate internal consensus. Take the time to agree on the points of differentiation, vision, and the long-term scope of services for the name—then you won’t outgrow it.

Trademark screening, which can take between one and four weeks, reduces the chance of finding yourself on the wrong end of a cease and desist letter. Put a lot of names—dozens—into trademark screening and expect most to be eliminated. Decision makers should be involved from the very beginning of an assignment to reduce surprises that can derail the process. No one reacts well to a list of names that are emailed, so present names to decision makers in person along with the strategic and marketing implications of each name.

2. Be sure the new name is descriptive, begins with the letter A, and has absolutely no negative connotations

Without a name that literally describes your company or product, people will have no idea what your company or product does. The name must convey every feature and benefit you’ve ever had or will have. Alphabetical trade show and information directories will be the only way to reach your customers, so it’s vital that the name appears at the beginning of such lists. Research proves people will read a list of names up to the letter B, and then call it a day. Of course names with so much as a whiff of negativity fail mightily. It’s just dumb luck that Virgin, Banana Republic, and Caterpillar have succeeded. Silly names like Google don’t stand a chance.

Nothing is less important than the first letter of a name. The impact of a name’s meaning and its many associations far outweigh the letter it begins with. In addition, you needn’t rely on a name to bear the burden of all marketing communications. A name should command attention and set a company or a product apart. Advertising, copy points, PR, and context should convey the function of your company or product—not the name.

You also don’t need to over worry about negative connotations. Many names with overt negative associations have been successful. Customers correctly assume that if a company chose a particular name, there is a good reason for it. This “positivity principle” explains why a scandalous name (Virgin), a slur (Banana Republic), and a small, hairy larva (Caterpillar) are perceived positively. Google demonstrates that even a playful, silly name can dominate its industry and quickly become part of consumer vernacular.

3. Alternatively, develop names that have no meaning whatsoever

If the name can’t say absolutely everything, it’s best if the name says nothing at all. Meaningless words are unburdened by relevance and personal associations, thus freeing up millions of advertising dollars to tell people what your name means and why they should care.

With enough money and time, a meaningless word can be made meaningful. Kodak, Xerox, Nabisco. and Pentium all prove that it’s possible to build a powerful brand on a word whose definition is impossible to guess. But why choose an “empty vessel” name when there are immediately relevant, real-word alternatives? Empty vessel names are inherently unmemorable because they have no readily discernable meaning; it’s easier to remember a name if it’s also a familiar word. Yes, a flood of expensive advertising can reduce the friction caused by an unmemorable empty vessel. But a deeply meaningful real word commands attention, connects with people, and spreads by word-of-mouth more effectively and inexpensively than advertisements.

4. Invite the entire company to brainstorm over pizza

Since naming’s easy and requires no particular expertise or specialization in marketing, linguistics, or trademark law, it’s best to have as many people as possible participate in the process. A really big brainstorm—a “namestorm” if you will—with a lot of employees blurting whatever comes to mind will result in a massive list of words, most of which will make a great name. Nothing gets the brain juices flowing faster than a stomach bursting with pizza. Let brainstormers engorge and watch their productivity shoot through the ceiling. 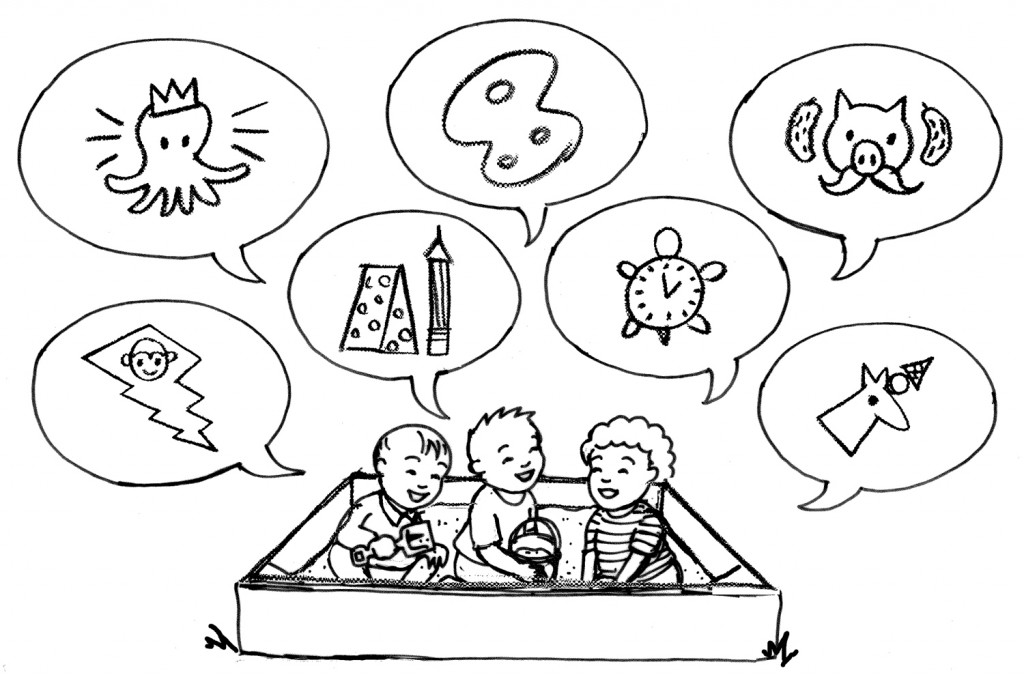 Great names rarely come from group brainstorming—and almost never if more than five people are in the room. Individual, heads-down thinking is the most fruitful way to create unique, breakthrough names. Start by inundating yourself in the project’s objectives, competition, and market situations. Then create names for 8–40 hours, divided between 3–4 sessions. Try to forget about the naming assignment between creative sessions. During this time, ideas will incubate in the back of your mind, and in due time the great “aha!” names may surprise you.

When done generating names, amass all of them into one long list. Select those that fit the objectives, command attention, and inspire ideas for marketing. Bring at least 20 names into your legal search, bearing in mind that those which ultimately survive is something of a crapshoot. To avoid crushing disappointment and to keep the project moving forward, don’t fall in love with any one name until after full trademark screening.

5. Then have a contest

Nothing says this name is so very important to our future than opening the naming process up to everyone. Like anything vital to your company’s future (strategic planning, mergers and acquisitions, etc.), the participation of all employees, from cleaning staff on up, guarantees success.

The desire to involve everyone in naming is understandable. It could conceivably foster a sense of empowerment, equality, and democracy. But branding is not a democracy. It requires a sharply focused point of view that is difficult to achieve if a lot of people are weighing in. Creating a great name also requires expertise across many specialized areas (such as marketing, trademark law, PR). It’s true that great names like Yahoo! and Google have been created by founders or employees of companies. But the chances of this happening are pretty low. Most times, employee-submitted names are not very distinct and probably wouldn’t clear trademark screening. Some corporate activities, like naming and architecture, and mergers and acquisitions, are best left to specialists who have a much better shot at seeing a project through to success.

6. Have a focus group to pick the winner

As a rule, it’s smart to entrust strategic business decisions to someone who trades an hour of their time for $25 and a few handfuls of M&Ms. Research proves that a focus group is the best way to pick the winning name. The dynamics of a focus group, in which participants naturally compete for World’s Biggest Brain and Most Piercing Wit, ensure that only the fittest names survive. Be sure to ask which name they like most and which will be most successful, because customers know a winner when they see it—oh yes they do.

Early on in a naming assignment, focus groups can be helpful for learning what’s important to customers. But focus groups are not a valid means of predicting what kinds of names will be successful in the real world. People are naturally averse to new names, especially when presented in the contrived context of a focus group. In this setting, groupthink often sets in. Rare is the focus group participant who will go out on a limb to disagree with everyone else. So, the group tends to favor names that are familiar and descriptive, the kinds of names that are difficult to mock. But in the real world, on packaging, on letterheads, on trucks and uniforms, names that are different attract attention and engage audiences. They have validity conferred on them because a company chose that specific name, presumably for a good reason.

As an example, consider the excellent name BlackBerry. Its prototype name was PocketLink, the type of moniker that a focus group would embrace because it’s a safe, descriptive name that makes it resistant to ridicule. But PocketLink would fail miserably in the real world because it’s a one-dimensional name that doesn’t command attention. It would get lost among all the other existing “pocket” and “link” names. BlackBerry’s success shows how an unexpected, undescriptive name can succeed, even among supposedly risk-averse business and government employees. So don’t expect a focus group to pick your winning name. Counsel with someone who has a lot of real-world naming experience.

Now that you know the six tips to creating a winning name, your success is almost secure. You’ll also require strength and discipline, as there may be detractors. Some might try to derail you by suggesting these steps will lead inexorably to a feeble, recessive, and ineffective brand name that requires millions of dollars to establish. To these doubters, respond with a laugh and a scoff: These winning tips were validated by a focus group.

This article was first published in Italian in Mark Up (31 October 2007); it also appeared in a slightly different form in The Advertiser (February 2008).

Even at the best of times, naming is a contentious and emotional business. Keep these principles in mind as you scout the perfect name. >

Chicago deserves—and gets—a bank as authentic, unique, and confident as the Windy City itself. >