Corporate focus on M&A to drive and supplement growth strategies is continuing at a solid pace in 2017, with the value of global mergers and acquisitions expected to increase over 2016. But with fewer megadeals on the horizon, many corporate buyers are focused on smaller targets—some with high prices—raising the stakes for how companies integrate, evolve, and grow acquired brands.

Brand decisions have significant impact on the long-term value of the combined companies. Yet, while pre-deal due diligence on financials, operations, technology, and human resources are an important part of every process, fewer companies spend time addressing branding in a systematic way before the transaction is completed.

With the size, value, and pace of deals shifting, it’s even more critical to consider brand issues earlier in the deal-making process. This includes questions such as: Will the acquired company be brought under the corporate umbrella? Will it continue to grow as an independent brand? Is an independent brand important to continue to attract customers? Or is there more value in an integration of brands? The answers to these questions can have a significant effect on the long-term value of a company. 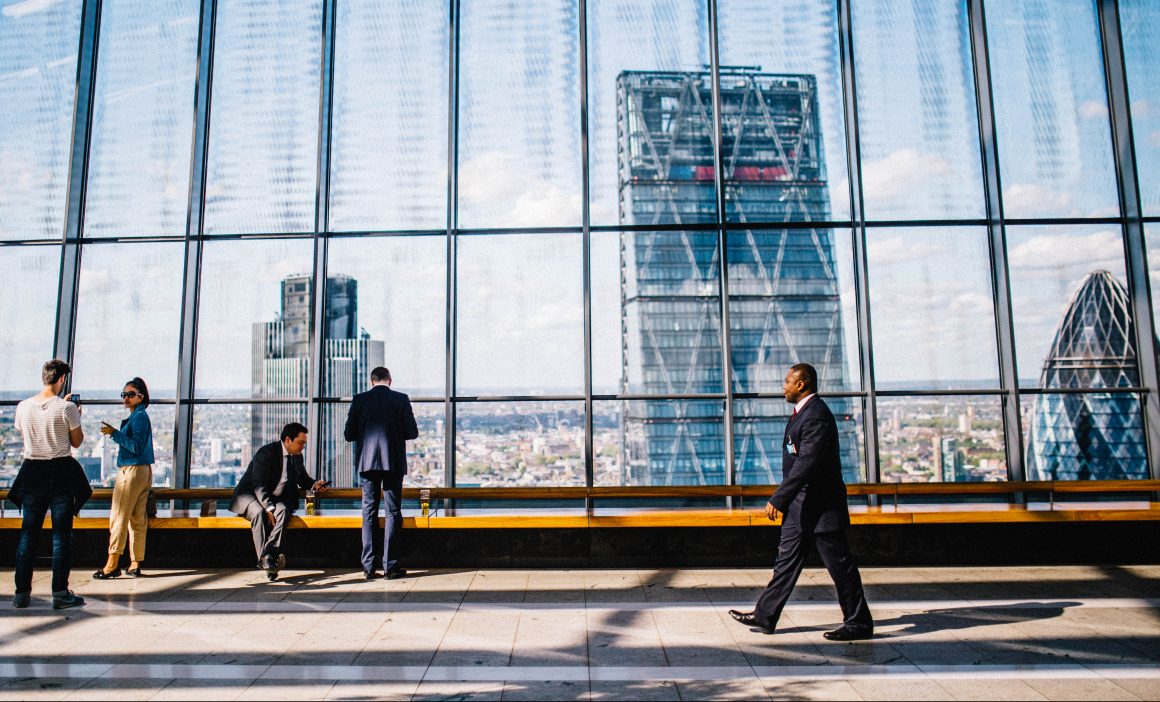 To provide more insights and quantitative benchmarks for executives faced with these questions, we recently conducted an analysis of the behavior of S&P 100 companies over the past 10 years to understand how, why, and when companies determine next steps for acquired brands. Key findings include:

As you might expect, many consumer companies keep the acquired brand’s name—more than any other sector. Many use a portfolio of brands model. One example is Amazon, which has enabled subbrands such as Zappos, Twitch, and IMDB to function independently. Or consider Coca-Cola, which acquired the organic tea company Honest Tea in 2011, and after six years has not made any significant branding changes.

In IT, financial services, health care, and energy, we found a different story. These sectors display the highest propensity to change acquired brands, with 75 to 80 percent of acquisitions rebranded. Capital One completed its acquisition of ING Direct in February 2012, and soon changed the brand to Capital One 360. In the technology sector, IBM has been on an acquisition spree over the past few years, buying companies such as Clearleap, which was quickly renamed IBM Cloud Video. 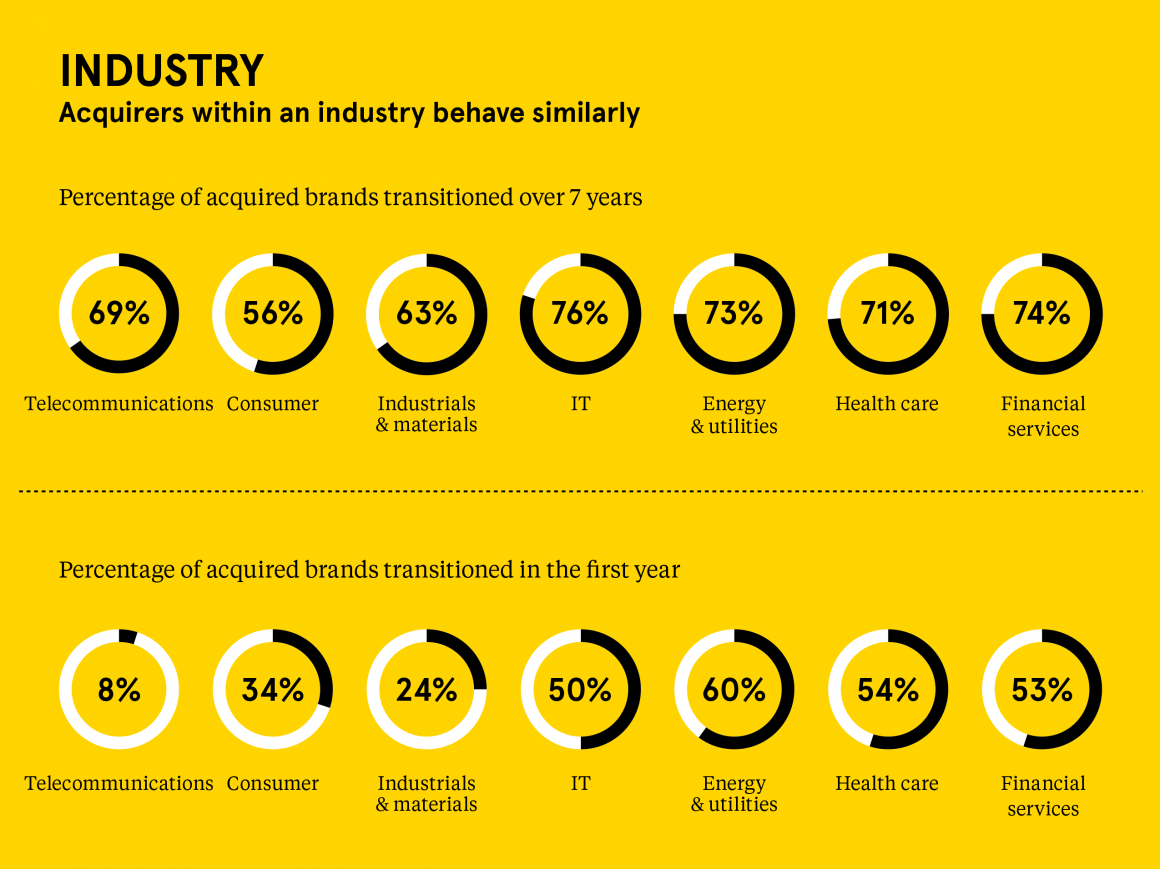 Seventy-eight percent of smaller deals (those under $99 million in deal value) resulted in brand changes; while only 46 percent of brands in deals $5 billion and greater transitioned the brands. Other characteristics also affect the likelihood of rebranding. For example, highly acquisitive companies such as Alphabet and Microsoft display a greater propensity to rebrand, at a rate of more than 80 percent. 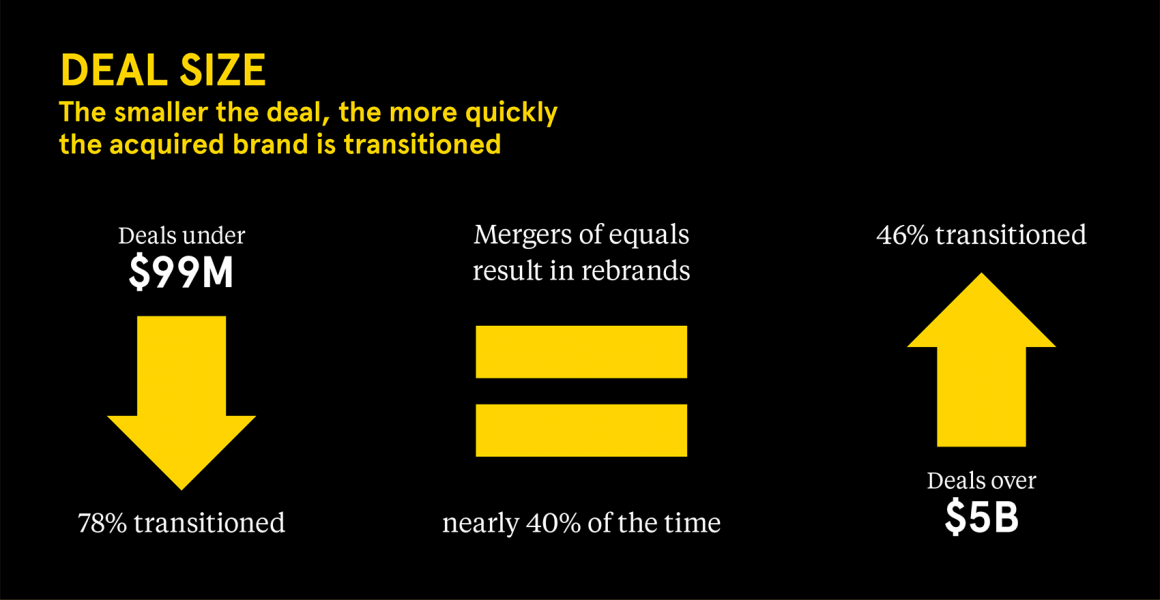 And megamerger rebrands occur more often than you might think. Nearly 40 percent of the megamergers we studied resulted in rebranding. Often, the merger of equals meant a merger of names, such as Alcatel-Lucent, DaimlerChrysler, and MillerCoors.

For executives involved in M&A, we discovered clear benchmarks by industry and deal size that can be helpful in evaluating brand decisions related to the deal. Using this type of data and making brand decisions earlier in the transaction process can have major implications for the long-term value of the company and return on investment for the deal.

This piece was first published as “What happens to a brand after the deal is done isn’t always part of early M&A planning—but it should be” on LinkedIn (11 October 2017).

How can business leaders make the best M&A decisions? The Landor M&A Brand Study provides an objective benchmark demonstrating the relationship between acquisitions and brand evolution. >

What are the keys to successful M&A? Here's why branding can make all the difference during a merger or acquisition—and how to get it right. >