When we arrived in Russia the first time, we had a clear set of expectations: lots of Prada bags, Beluga caviar, and French champagne; essentially the kind of ostentatious consumption you see from the Russian contingent in London’s Knightsbridge.

The reality, of course, is very different. The stereotype of Russians formed during the 1990s—ravenous for Rolexes—has long since receded. Today, the Russian consumer is a far more complex proposition—someone acutely aware of quality, price, and provenance.

This year, Landor commissioned the Russian Insights Program to delve deeper into this powerhouse of consumption. The results, compiled in our Russian Consumer Report 2014, were enlightening. Our 2,000 respondents debunked long-standing myths and demonstrated that Russia remains a land of contrast and contradiction, where brand building is now more important than ever.

It’s been more than 20 years since the fall of the Soviet Union, and the Russian consumer has come of age. No longer in awe of the West or the shiny novelties it calls “brands,” Russian consumers are becoming increasingly savvy about what they buy and receive in return. Make no mistake—Russia won’t simply be following a well-trodden path; the road it takes will be all its own.

There are 143 million Russian consumers, and for the first time in 20 years that number is growing. What’s more, Russians are getting richer and have more money to spend on consumer goods.

Retail is the driving force of the economy and is three times larger than the raw materials sector in terms of value.1 According to the Russian state statistics agency Rosstat,2 Russia is already among the top three European markets by value for almost all consumer products3 and is number one, as of 2013, in categories such as mobile telecom, dairy, clothing, footwear, and apparel.4

With endless opportunity, there’s never been a more interesting time to be building brands in Russia. But simply replicating Western practices won’t do—our results show that Russian consumers have a unique set of needs that must be met. Here are six insights from our report: 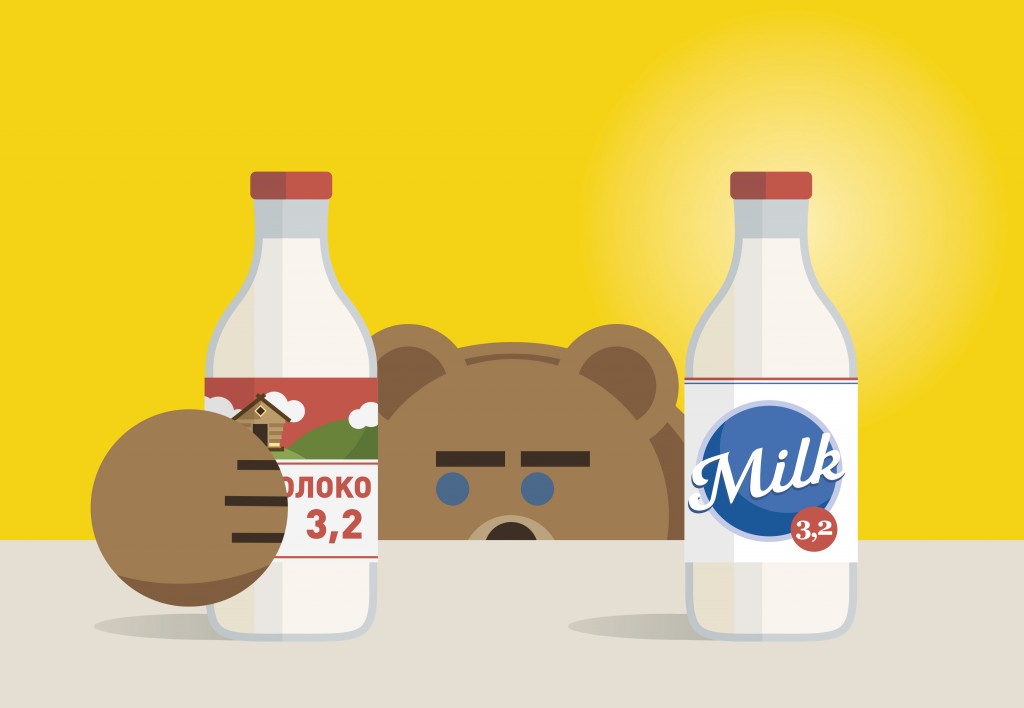 1. Russians prefer to buy Russian, but domestic companies are failing to deliver

Our results show that there is a potent “product nationalism” in the world of Russian retail. Customers generally prefer to buy Russian if they have a choice. 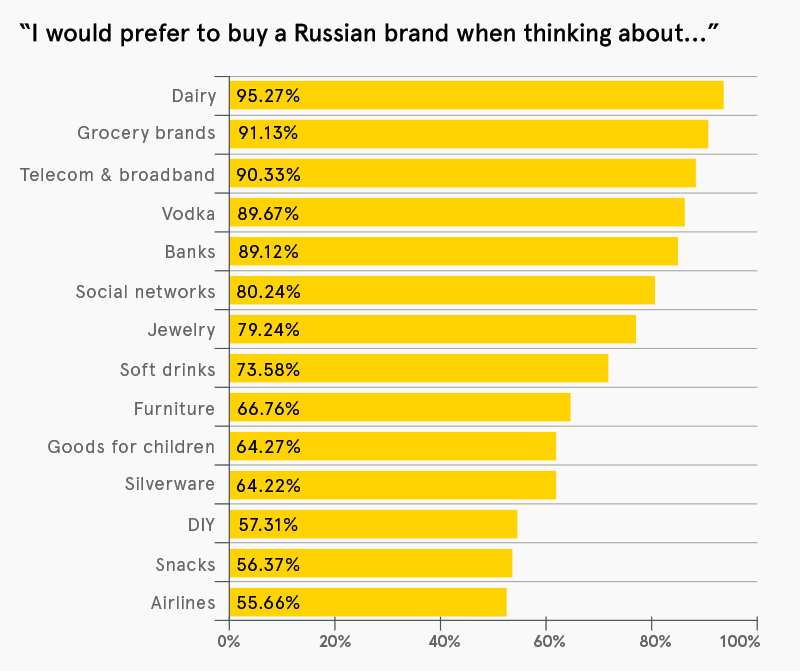 Almost half of those surveyed believe that Russian brands understand their needs better than Western brands do, while a third say Western brands aren’t appropriate for Russia at all. Consumers show a preference for domestic brands in over half of the sectors surveyed, with domestic dairy, grocery, telecom, vodka, banking, and social networking brands preferred by a whopping 80 percent of Russian consumers. 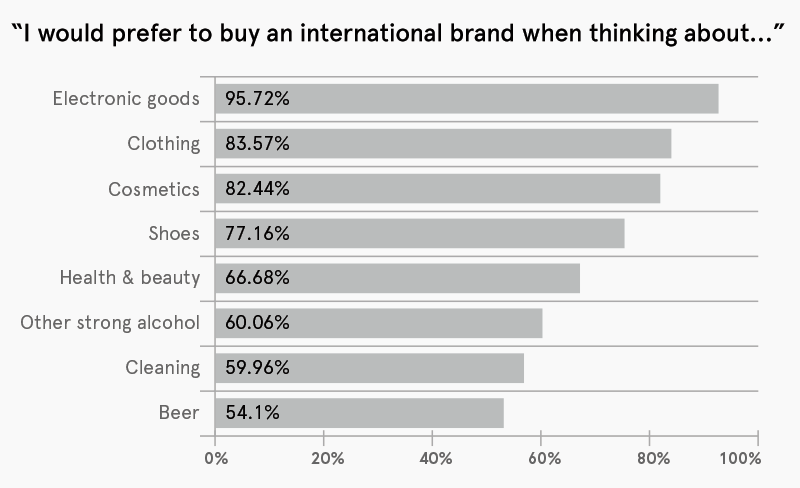 Nevertheless, international brands continue to outperform Russian brands on every key metric in our survey except tradition. Russian brands need to invest heavily in building a holistic brand experience to promote not only more positive image drivers (like style and prestige), but also improved products and services. 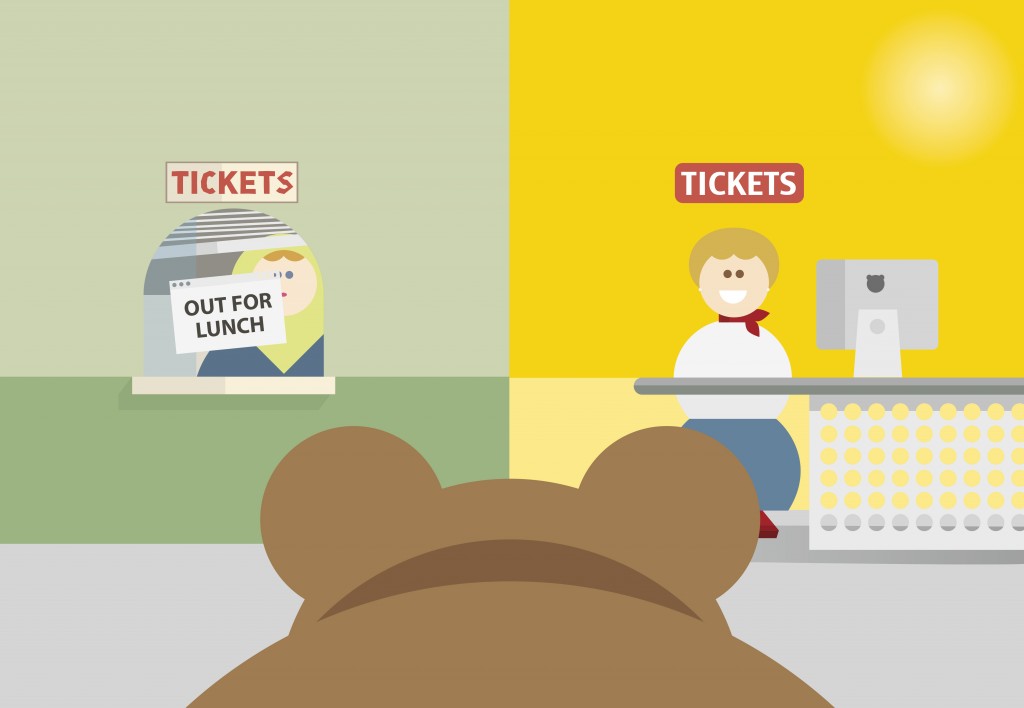 2. Service is improving, but it still lags behind Western Europe and the United States

Russian service has been the butt of jokes for 70 years, but since the establishment of the free market it has improved steadily. The New York Timesrecently declared that “a new generation of Russian flight attendants, shop assistants, and waitresses has become—amazingly, given [Russia’s] sour attitude to friendly service for so many years—customer-oriented.”5 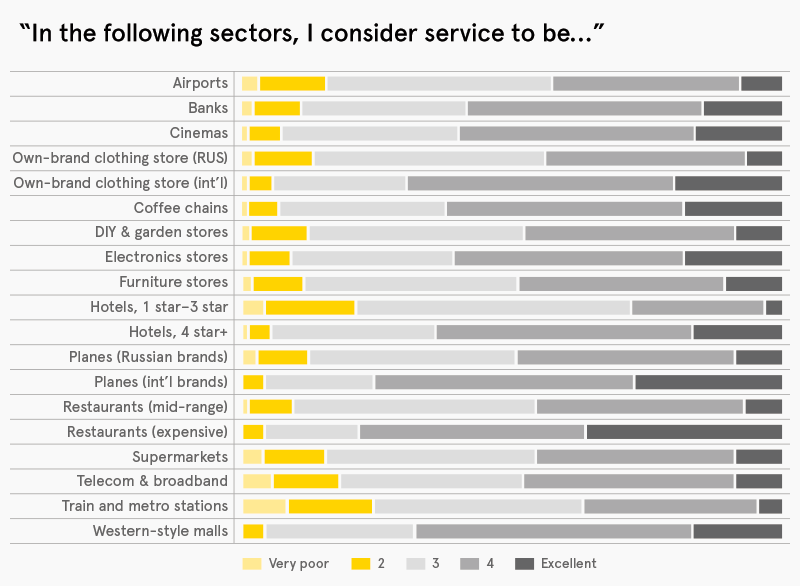 Our study found that over half of Russians (54 percent) think that service is improving in the country, but they still think that it fails to meet the high standards that increasingly well-traveled consumers have come to expect. The message is clear: Russian service brands need to continue to invest in service design and customer service training to satisfy changing demands. 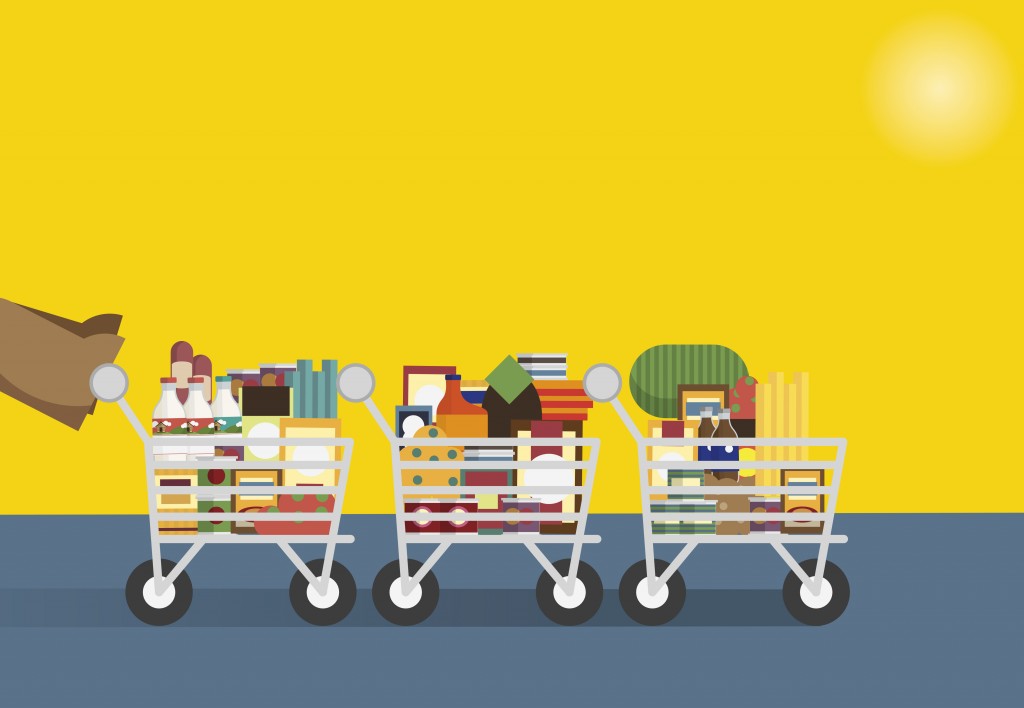 3. Russians love their food, and choose to spend lots of money on it!

Russians have very strong views on food and prefer high-quality products over cheap, processed food. Over 90 percent of Russians would prefer to buy domestic food and dairy products. However, high-quality foreign alternatives continue to pour in as Russian manufacturers fail to deliver the range and quality of products required by consumers with an increasingly developed and varied palate. 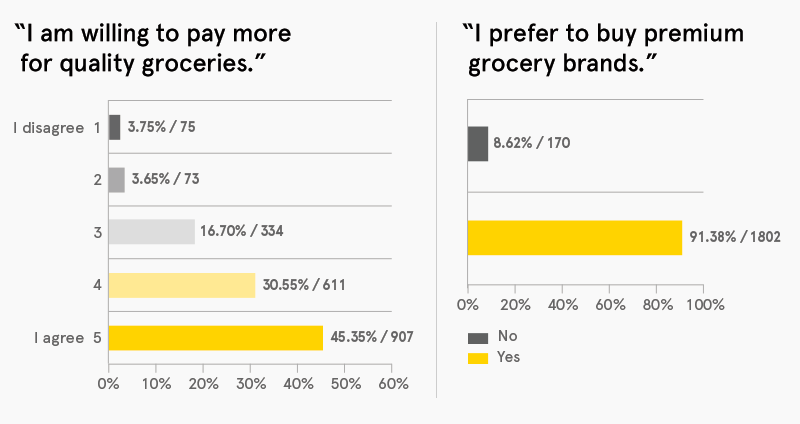 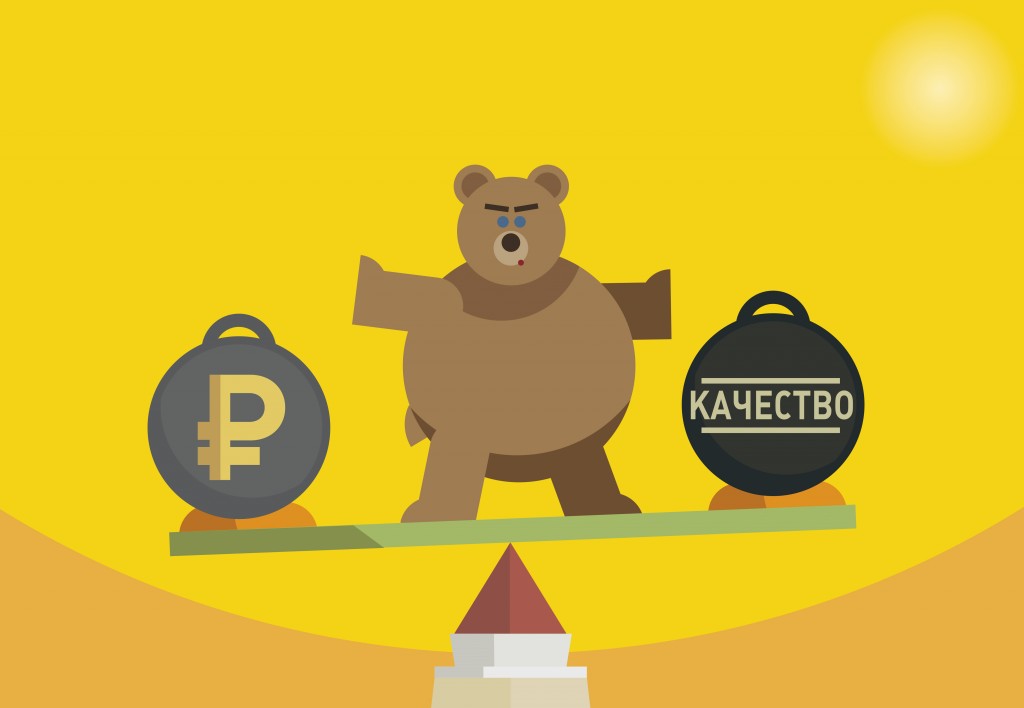 Almost half of Russians will pay more for quality, but they remain price conscious. However, Russians have an aversion to the words “cheap” and “budget.” The overwhelming majority of consumers felt uncomfortable buying a budget brand. Participants felt especially negatively toward budget telecom and travel, both sectors that have experienced a low-cost boom in the West. This suggests that simply mirroring low-cost strategies that have succeeded in other markets won’t work in Russia.

Contrary to stereotypes, Russians are increasingly savvy about choosing premium or luxury goods, preferring high-end brands in only a handful of categories such as electronics, cars, shoes, and cosmetics.

Brands need to focus more on building a reputation for quality and value than on making price plays at the lower end of the spectrum or premium plays at the higher end. 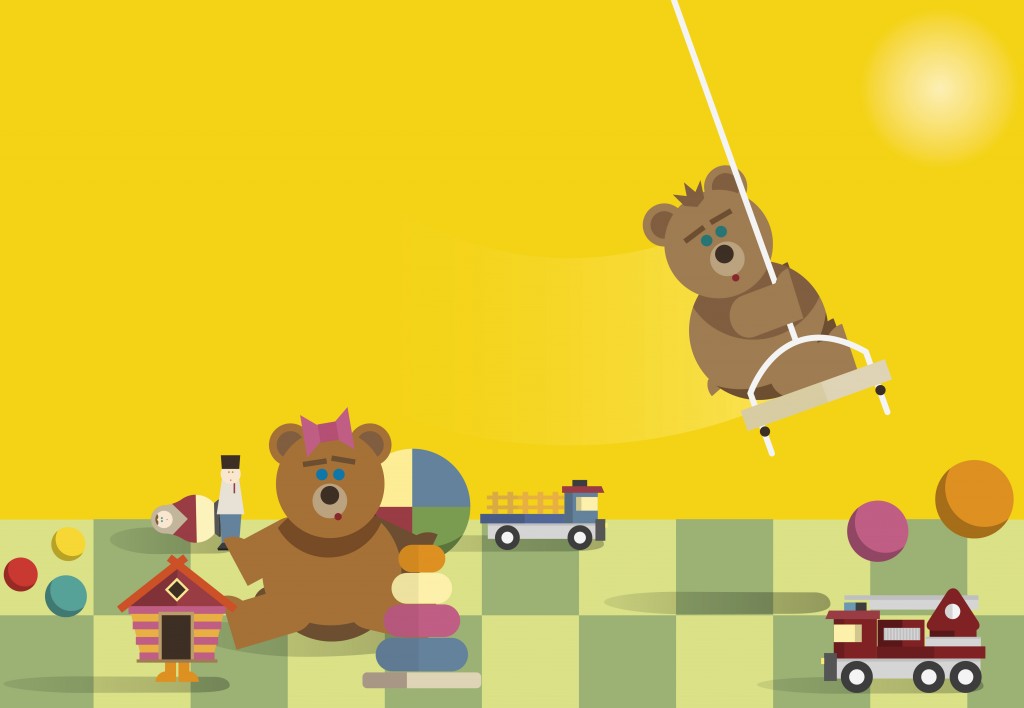 5. Russians love their kids and are ready to spend on them

Children’s goods are the third-biggest expenditure for Russian families after food and rent or mortgage, according to our survey. In 2013, Russia’s population began to grow again for the first time since the breakup of the Soviet Union, and businesses catering to children are flourishing. Why? Because Russians don’t like to scrimp on their kids—almost half of Russians prefer to buy premium children’s products. 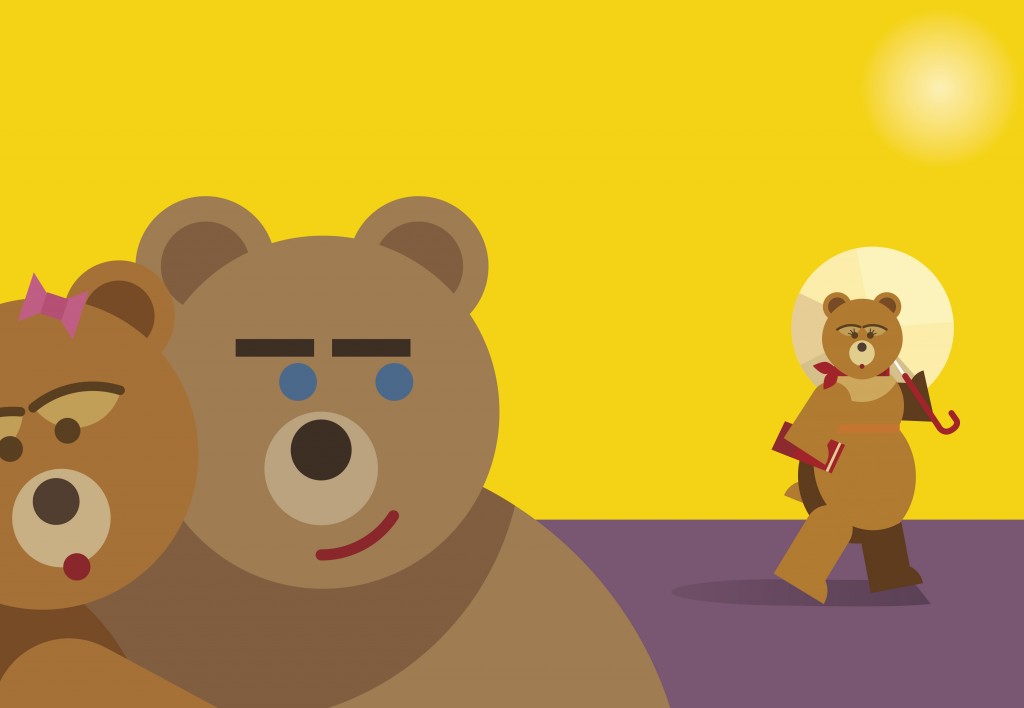 Russian companies understand marketing well, but the idea of a brand (and by extension, the idea of loyalty to one) remains relatively new. For shoppers, choice remains a luxury, and a third of Russians say they try out new brands most or all of the time.

This doesn’t mean brand loyalty doesn’t exist. Interestingly, it’s much higher in categories dominated by Western brands, like electronic goods and cars. This suggests that while Russian businesses may be increasingly aware of the aesthetic elements of branding, they still have a way to go when it comes to using brand equity to retain customers.

Our Russian Consumer Report 2014 draws a picture of a country with enormous potential and a unique set of challenges. Not everyone will succeed in the race for Russia, but the smartest businesses will realize that the power of branding has yet to be fully realized in this vast terrain.

There is still a battle to be waged for the hearts and minds of the Russian consumer, and only with a nuanced understanding of the consumer landscape can brands truly conquer a market that is not only increasingly demanding, but also ever savvier about where consumers buy, how much they spend, and what they get in return.

Be smart in 2014, and try to make friends with the big Russian bear. Underestimate him at your peril.

Emma Beckmann, country director in the Moscow office of Landor Associates, speaks to the Voice of Russia U.K. about the average Russian consumer and opportunities for British firms in Russia. Listen to the podcast

Matthew Kissane, strategy director in the Moscow office of Landor Associates, is a guest on Monocle’s The Entrepreneurs, edition 123, speaking about Russia’s maturing market and the results of Landor’s Russian Insights Report. Listen to the podcast