Visit any airport in Russia and you will immediately notice that the aircraft on the tarmac look almost exactly alike. The only difference is the name of each airline, written in Cyrillic.

The reason for this is simple. When the Soviet Union split up in the early 1990s, the state airline Aeroflot was broken into thousands of “babyflots”–mini local and regional airlines, often with fleets of just one or two aircraft. Most babyflots were so small that they couldn’t afford to invest in repainting aircraft, so they all kept the blue and white Aeroflot design, which explains why most Russian aircraft look the same more than a decade later. But the lack of visual differentiation also reflects how little Russians understood the need for differentiation in a competitive market, and in the words of one of our clients, is part of “the Soviet ‘anti-brand’ legacy.”

Siberia Airlines was a babyflot acquired by the husband-and-wife team Vladislav and Natalia Filiov in 1998. Since then, its new, young management team has successfully streamlined services and cut costs. Siberia is now Russia’s largest domestic airline with over 150 daily flights to more than 70 destinations. It is also the fifth fastest-growing airline in the world and has aspirations of becoming the preferred carrier among Russian flyers.

In spring 2003, Siberia Airlines charged Landor with the task of turning its successful commercial operation into a modern and distinctive brand. We began by implementing a strategic brand review to define and enshrine what is uniquely relevant and differentiated about the airline, and applied that to a new name, visual identity, and look and feel. The new identity was then extended to lounges, aircraft interiors and exteriors, check-in desks, ticketing offices, uniforms, and print collateral.

Konstantin Koshman, regional development director for Siberia Airlines, commented: “We are now in a position to strengthen our relevance to our loyal regional customer base while further expanding this base with international customers. We believe building our brand will be the key to our success. With its incredible track record in airline branding, Landor Associates is the best possible partner to help us make this happen.”

This was not a minor design exercise or an evolutionary change. The intent was to usher in a full-blown, brand-led business transformation that would forever change the face of the Russian air transport sector. Creating a brand relevant to consumers and differentiated from its commercial rivals was the goal.

Today there are about 260 air carriers in Russia. Those knowledgeable in the field agree that consolidation will reduce that number to some 30 within the next decade. Siberia Airlines expects its market share to double during that period. However, it is also likely that its competitors will become more sophisticated.

Siberia Airlines plans enormous investment over the next three to five years in new Western planes to replace its fleet of aging Russian aircraft. But to achieve its commercial aspirations of being at the forefront of a rapidly consolidating market, Siberia Airlines must be clearly differentiated in passengers’ minds. This means that the company itself will have to undergo a profound cultural change: It must break with the Russian transport mentality of simply moving people from A to B and become a true customer-oriented service brand.

Surprisingly, in spite of Siberia Airlines’ commercial success as the largest Russian domestic carrier and charter airline, it did not know how Russians felt about flying. Research was conducted to assess Russian passengers’ attitudes toward flying and airlines in general.

Although Russian flyers have more recently glimpsed the possibilities of something better–principally through international carriers such as Lufthansa–the shadow of state-owned heritage still seems to loom over the entire sector. Passengers describe flying as only slightly more exciting than catching a bus or a train.

Russian travelers care about safety, convenience, and price. Their ideal airline is safe, distinctive, colorful, personable, responsive, caring, and–significantly–unencumbered by any legacy from the past. Like their Western counterparts, Russians prefer to travel with larger airlines because smaller carriers are perceived as less reliable. Among Russians, the name Siberia Airlines has connotations of strength, health, and simplicity, unlike the negative associations of Western stereotypes. But it also carries old-fashioned undertones, suggests a lack of dynamism and screams “provincial.”

This was a vital insight. The airline already had three strong hubs, but the regional associations were limiting passenger perceptions of scale, success, and credible expansion. Customers were ready for change.

A series of workshops attended by a Landor team and members of the Siberia Airlines Board helped articulate the airline’s special difference. An antidote to Soviet heritage, “A breath of fresh air” became the Brand Driver™ platform to inform the new name, identity, and look and feel of the airline as well as the entire passenger journey, ensuring a consistent branded experience whenever customers encounter it.

Developing a new name was more difficult. The name had to reflect the brand positioning and appeal to the target market of younger, more cosmopolitan Russians. It had to be flexible enough to potentially move beyond the airline category. Most challenging was that it had to use letters common to both the Cyrillic and Roman alphabets.

Siberia’s IATA code “S7” was one of the few names that met all the criteria. It was already in use as the airline’s web address and the prefix to its flight numbers, and it was universally recognizable and memorable. It looked new and modern and could accommodate brand stretch. Most importantly, it represented a completely new approach to naming in the airline sector and supported the positioning of “A breath of fresh air” by doing things differently.

Developing the design brief for the brand’s identity and visual language was relatively straightforward. A team of designers created three design options to evoke the brand positioning. Our client chose the identity that is currently being implemented across S7. 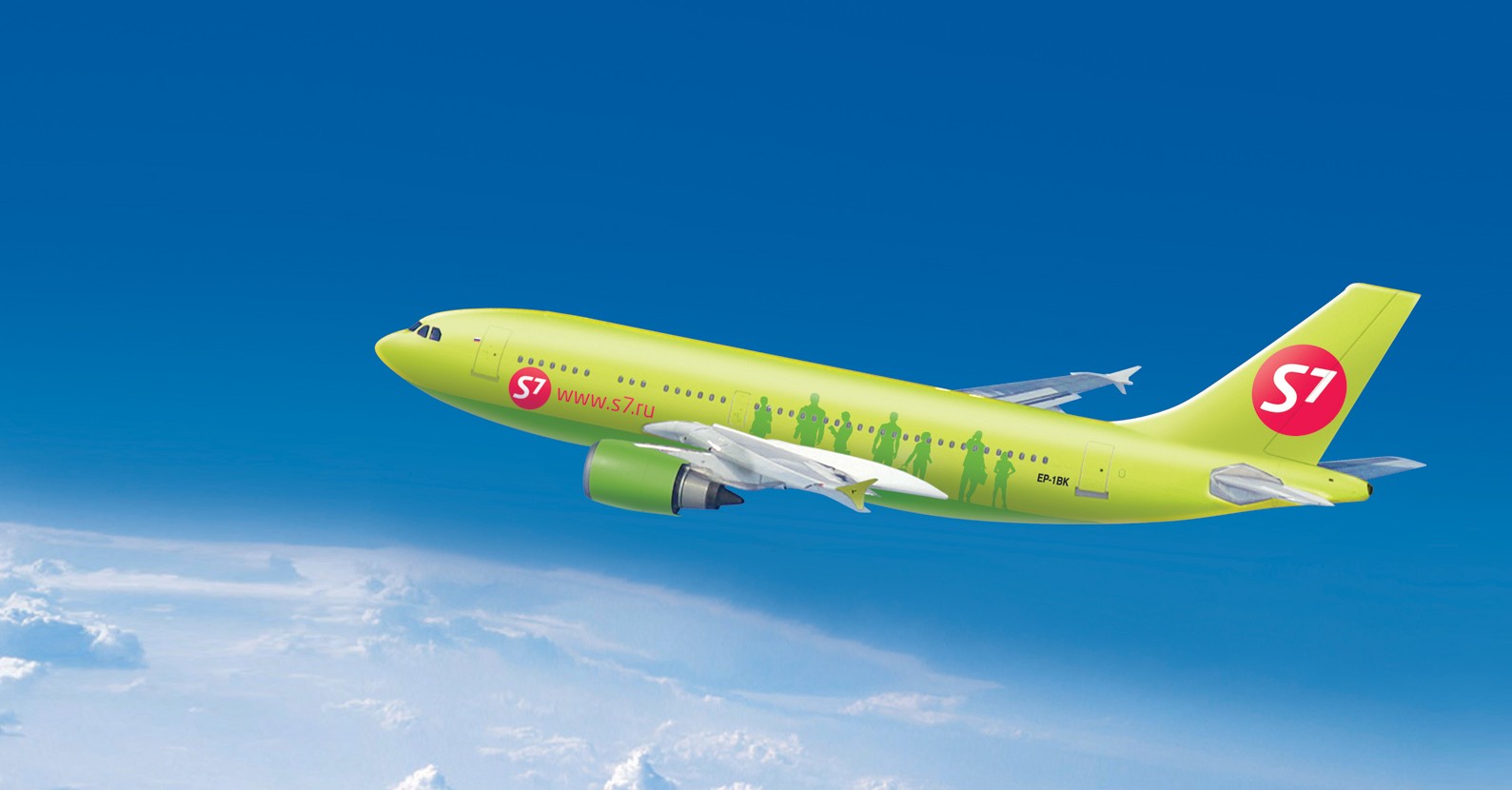 Two shades of vibrant green were selected as fresh, modern, and distinctive; they stand out dramatically on the tarmac, particularly in the snow. The airline’s commitment to putting customers first was depicted by using silhouettes of passengers in a deeper shade of green along the side of the fuselage. This graphic device is repeated in other applications such as lounges, tickets, and cabin interiors.

A newly designed business lounge in Moscow’s Domodedovo Airport launched in spring 2005. It is another key part of the customer experience of the brand and is unlike anything in the Russian travel market. The lounge consists of three areas-entrance, café/bar, and office/home space. Two freestanding concierge stations replace the standard desk at the lounge entrance. Lighting is used to change the environment over the course of the day, marking the transition from work to relaxation. Live piano music adds to the feeling of an intimate club. 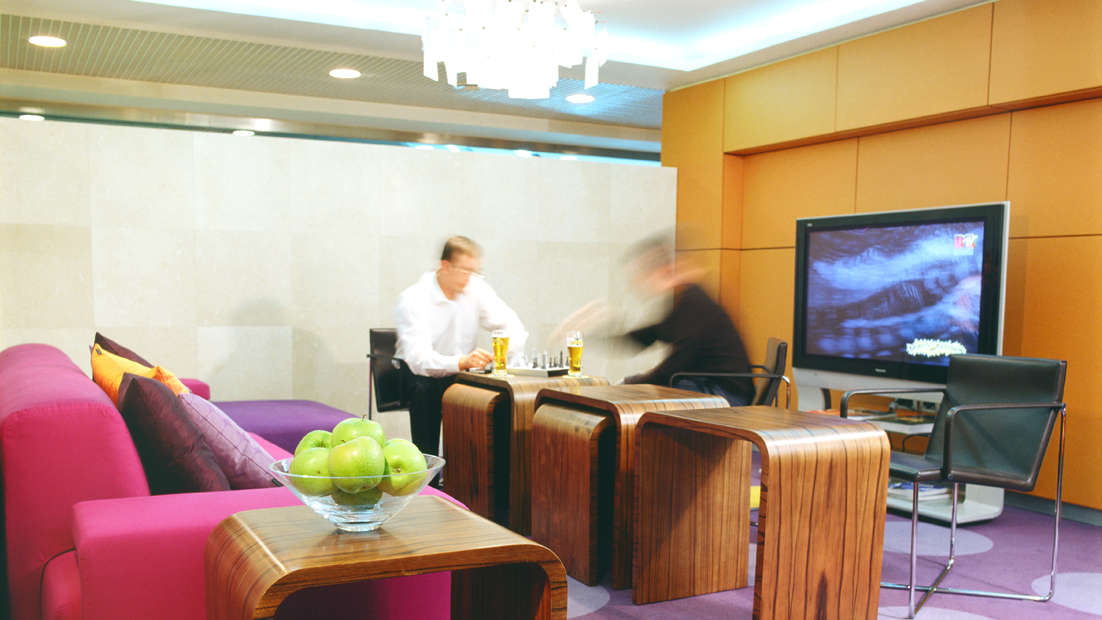 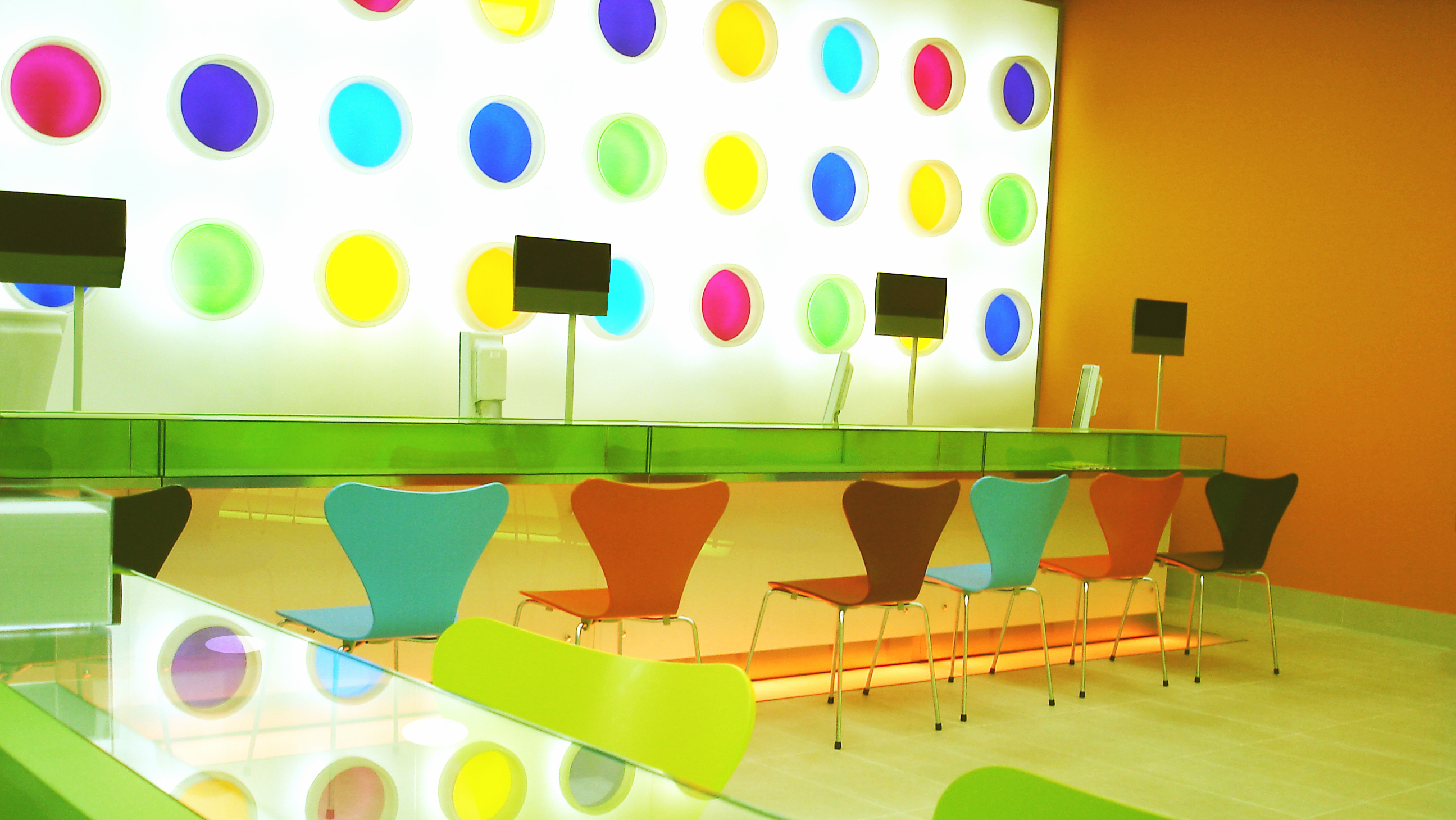 The aircraft cabin interior designs also break from the standard. They give the feel of unwrapping a package: with the green on the outside, the multicolored, multidimensional passenger experience is revealed on the inside. The seats in both business and economy class cabins use colorful fabrics with a dot pattern–a reference to the S7 logo. Business class seats are in shades of purple, economy seats in turquoise, both complemented by contrasting colors used in the carpet, armrests, and headrests. The graphic device of silhouettes is carried through to the bulkheads.

From regional carrier to national airline

The new S7 brand had a soft launch in autumn 2005, but the name, identity, and livery were only the beginning. The S7 story continues to unfold as the brand promise becomes more firmly embedded in the organization and drives all business and brand decisions.

Vladislav Filiov, general director of Siberia Airlines, comments: “Like many companies in Russia we faced a challenge of overcoming the Soviet ‘anti-brand’ legacy and our co-operation with Landor proves that this extremely difficult task is achievable. We hope to bring our passengers an experience that they have never had before.”

Peter Knapp, executive creative director for Landor Associates, says: “Consumers in Russia are much more brand savvy and familiar with Western branding and associated lifestyle aspirations than ever. Our task was to help Siberia Airlines leave its regionalism behind by becoming a strong national brand that breaks convention in its sector and has the flexibility to become a lifestyle brand that works beyond air travel in the future.”

Following Landor’s involvement with the brand, S7’s traffic boosted by almost a fifth in 2007. It handled just under 5.7 million passengers–a rise of 19 percent from 2006. The majority of this growth was in the domestic sector where numbers increased by 22 percent (Source: Airliner World May 2008).

S7 is well on its way to becoming Russia’s favorite national airline.

This story was first published in Russian in Identity (March 2006).
© 2006 Identity. All rights reserved.

After years of losses, the Indonesian national airline sees profits soar to $82 million when Landor handles its rebrand. >